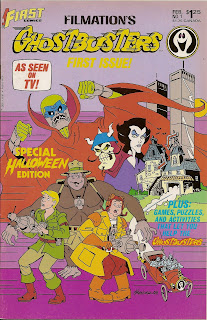 As painful an admission as it may be for some of us, Pete, Ray and Egon weren’t the original Ghostbusters. In 1975, Filmation, the company best known for being behind the He-Man and the Masters of the Universe cartoon, released a comedy show about a pair of detectives and their gorilla who were sent after a different ghost in every episode. The result was a glacially-paced show that relied on lame puns and tired slapstick for its laughs, and the detectives were played by those two guys from F-Troop. Unsurprisingly only a single season of 15 episodes was made.


Of course in 1984 a certain spooky comedy came out and busting ghosts was hip all of a sudden. Since they had a property called “The Ghost Busters” out first, Filmation was able to make a cartoon revival of their original show, starring Jake and Eddie, the grown sons of the original detectives. Most of their adventures had them battling the unimaginatively named villainous ghost, Prime Evil. This more than anything else is probably why the cartoon based on the movie was called The Real Ghostbusters. 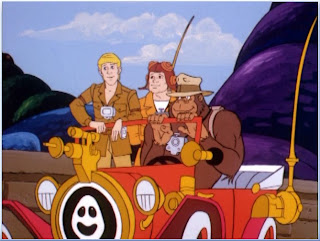 But as you’ll remember if you were around back then, the movie property was huge, and to get a piece of the action Filmation had to pull out all the stops. Like getting a tie-in comic book. Not just a comic book either, an interactive comic book. And to release the first issue as a Halloween special, just when kids are thinking about ghosts and goblins. 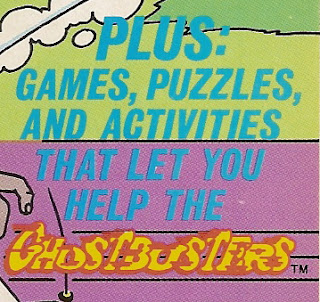 We open on the Ghostbusters’ office where pudgy, scaredy cat (boy is he in the wrong line of work) comic relief Eddie is trying on costumes before they go to a Halloween party (why’s everybody else wearing a normal outfit?). You wouldn’t think this would be something that would excite them, since ghosts are kind of their job. Heck, I don’t even know why they’d be planning anything social on Halloween. Not only would you assume that’s when the most ghosts are out, it was a plot point not only in this comic but an episode of the show too. And yes, I’m pathetic for knowing that.

Cleverly-named time-traveling sorceress Futura pops in then because…the story about to be unveiled involves time travel and she’d be handy to have around. Also along for the ride for some reason is intrepid female journalist Jessica Wray.

Since Eddie can’t make up his mind what costume to wear, the comic asks you to help sort things out. That is, by presenting a picture of Eddie in his underwear and asking you to draw a costume on top of it. 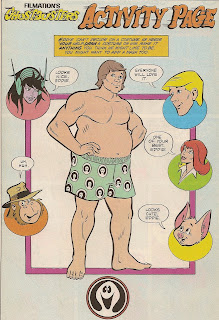 Let’s just skip to the “plot,” which has Prime Evil traveling back in time to some nebulous medieval kingdom to enlist all the ghosts running amok there on Halloween. He sends Mysteria, one of the ghosts already working for him, to put out fires around the local castle to ward off the ghosts. Because that’s easier than having her make a circuit around the castle and pick up the ghosts that can’t get through because of those fires? If ghosts can put out the fires, how are the fires supposed to keep them away in the first place?

By the way, this comic spells her name with a Y, but considering the show calls her “mistress of mists,” I’m spelling it with an I. If Filmation doesn’t like it they can send me a letter. 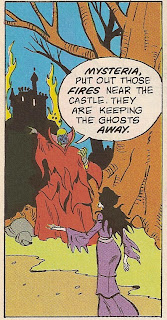 A magician sees what they’re up to and runs back to the castle to warn the king, zapping ghosts in half with his wand on the way. Gee, that looks kind of lethal. 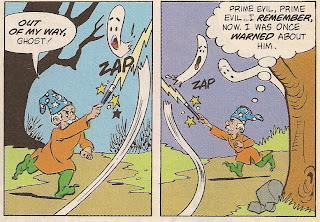 When said magician, who’s named Morton, tries to think of what he can do about Prime Evil he remembers how the original Ghostbusters saved the kingdom from a dragon once. This is picking nits, I admit, but that’s kind of a stretch considering Filmation was infamous for doing everything it possibly could to keep costs down. Every episode of the original show took place in the same haunted castle to save on things like time travel effects and new sets.


But whatever. After several unsuccessful (and unfunny) attempts to remember what it is future people use to talk to each other over long distances, Morton calls the current Ghostbusters just as Jake’s given up on the costume thing and is just mocking Eddie. 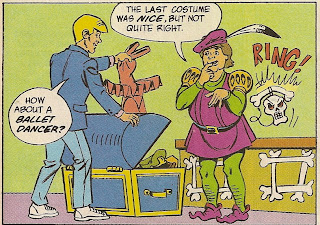 After agreeing to help, Jake has the others get a file from a living, smartass filing cabinet (which believe it or not was a running gag on the original show, which believe it or not they apparently thought was so funny it was worth bringing back). This explains the whole building fires to repel ghosts on Halloween thing, but since this show just made things up as it went along (I once read an interview with Jake’s voice actor who said the show didn’t even have a writer’s bible) I don’t feel compelled to find out if this used to be an actual Halloween ritual. Let’s move on to that tried-and-true time-consuming device, the transformation sequence. 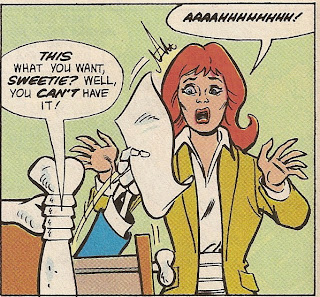 Like on He-Man, almost every episode involved the heroes changing from their regular look to one more suited to fighting bad guys. Unlike in He-Man where the transformation gave him a tan and super-powers, in this cartoon it just involved them changing their clothes in this insanely elaborate machine in some kind of parallel dimension in the upper floors of their house.

If you think it sounds ridiculous, you should try watching it. When nothing was edited out, it could run for an entire minute and a half. On a show that, counting opening, end credits, and post-episode sermonette, ran for about 22 and a half minutes. 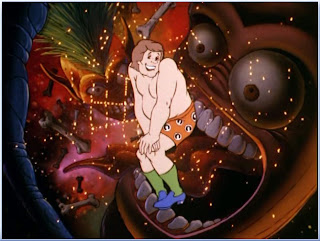 The comic actually skips over this part and gets straight to the Ghostbusters riding their talking car into the past, which leads into the next activity. It’s a maze through time, and warns you not to screw up or the Ghostbusters will show up too late to help. Even though they’re time traveling. 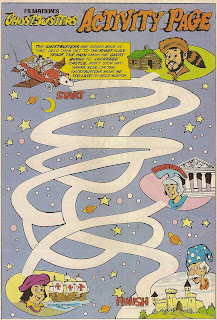 Presumably helping the busters to arrive in time, they find Misteria menacing a couple of knights as they build a fire. They distract her by having Jessica disguise herself as Misteria, distracting her long enough to be zapped by their Dematerializer gun. Which does exactly what it says, and makes the ghost disappear…for a while. So the writers can have them be back whenever a script might call for them. Suppose it's just as well they don't actually appear to be running a business. The grateful knights direct them to the castle on top of a giant hill and the busters ride off, right onto the next activity page. Which is the easiest hidden object puzzle in the world. 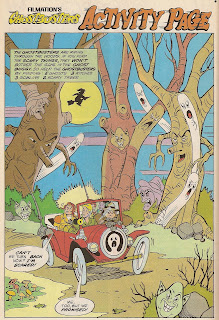 Prime Evil sees that the busters have come back in time to spoil his fun, and sends another of his ghosts, Sir Trance-a-Lot, to deal with them, and issues a strangely graphic threat for a comic meant for little kids. 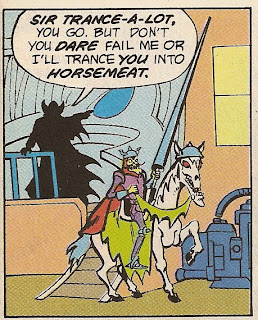 Once they’ve gotten past the easiest hidden object puzzle in the world, the busters explain they’re not the ones Morton called for, since their dads have retired (because time’s continuous even when you’re doing something across time, apparently) then head up to his workshop to find something to use to get rid of Prime Evil. Witness Jessica’s hypocrisy, or perhaps just acknowledgement that even they don’t know why they let Eddie save the world with them. 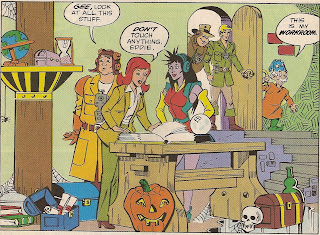 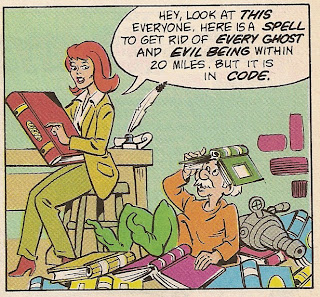 Jessica finds a spell book with a spell to get rid of ghosts, but for some reason the words are in code and the spell has to be cast right after it’s decoded or it won’t be powerful enough to get rid of Prime Evil. Not sure how that works, since the show was actually fairly consistent about how magic works (in that magicians just learn how to channel the energy without words), but then we needed yet another activity page for some reason. 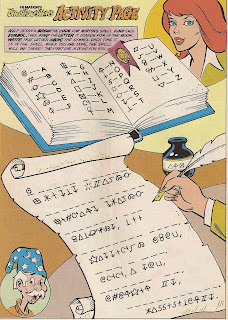 Sir Trance-a-Lot rides up the castle, so Jake has the princesses (and Eddie in a dress) distract him so their gorilla buddy can zap him with the Dematerializer. As opposed to hiding behind a corner and zapping him as soon as he comes into sight. 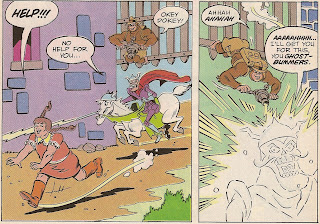 Not sure why this rigamarole was needed except to kill a page and a half, considering that when Morton casts the spell it makes all the ghosts, even the building Prime Evil lives in, disappear. 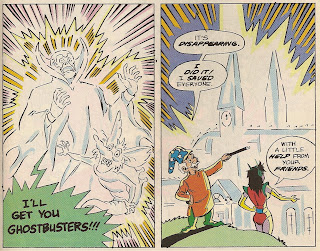 With the ghosts vanquished the kingdom gets to have its Halloween party after all. And Eddie’s still in a dress for some reason even though Jake changed into a Robin Hood outfit for the occasion. And the girls want to leave right as things are getting started. Women, huh? 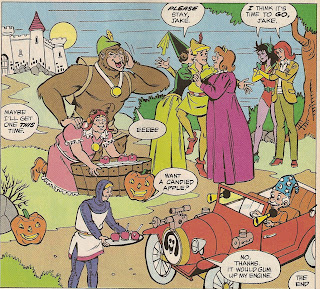 Another activity page, but with no effort to connect it with the story. Just a word find and how to draw half of Prime Evil’s face. 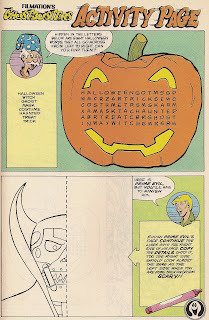 Then there’s the answer pages to the other games, and then six pages about how you can draw the characters from the show. As if anybody in the show’s demographic has that kind of attention span. 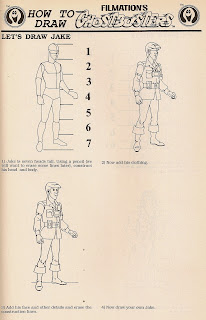 Posted by starofjustice at 5:03 PM